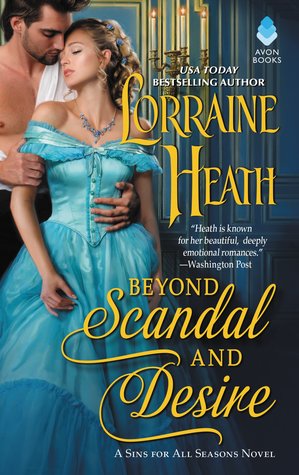 Beyond Scandal & Desire by Lorraine Heath

First book of A Sin For All Seasons series

Mick Trewlove was born in sin, the bastard of a duke, and given away, seemingly never to be heard from again. However, Mick has fashioned himself into a man to be reckoned with—a highly successful businessman who members of the ton scramble to invest in. All of this power is a means to an end: revenge on the man who sired him. He intends to destroy the duke’s legitimate son, taking his income and stealing away his intended.

However, Mick didn’t plan on Lady Aslyn Hastings. She’s beautiful, kind-hearted, and adventurous, and Mick can’t help but be drawn in by the women he is supposed to seduce. And Aslyn feels the same; despite her betrothal, she can’t help but keep meeting Mick and falling in love with him. But when the truth comes out, will their relationship withstand the beating?

Readalikes:
Marrying Winterbourne by Lisa Kleypas
I Thee Wed by Amanda Quick
A Secret Affair by Mary Balogh
Seven Minutes in Heaven by Eloisa James
Mine Till Midnight by Lisa Kleypas
The Devil To Pay by Liz Carlyle